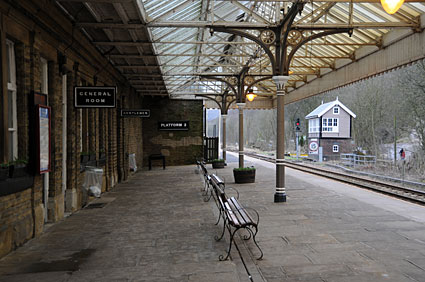 “Are you waiting for someone, miss?”

“Would you prefer to sit in the waiting room?”

She had been sitting there for quite some time and the train station master was beginning to wonder if she was really waiting for anyone at all. She certainly appeared to be expecting someone, though. Her hair was immaculate despite the journey and several curls were pinned back in a simple yet fetching style. Her blouse and skirt were smoothly-pressed and not a stain in sight, as was her coat. Her pearl necklace and brooch were rather at odds with the costume-jewelry trends of modern fashion, but they became her and leant an attractive grace to her as she sat with head held high (but not to the point of being too high and thus prideful) and shoulders back. The only part of her appearance that did not seem to be well-groomed were her shoes. They must once have been as proper and pretty as the rest of her, but were now were scuffed and muddy as though she had marched through treacherous woodland trails rather than taken a train to London. But she paid no mind. Perhaps she had been through a difficult journey, but she had kept the rest of her personage neat and respectable and now she was waiting.

Another hour passed and she had barely moved a muscle. The station master was beginning to be impatient for her and wondered how anyone could have the strength to sit so still for so long without so much as a word of complaint. His stomach growled and he checked his watch. It was lunchtime, but he could not leave her unattended. The rest of the passengers had vacated the platform long ago. If she would just go sit in the waiting room instead, he could go get a bite at the pub across the street. He could smell the aroma of frying fish and chips through the mixture of train steam and cheap coffee.

“Yes?” she turned to face him with a soft smile that almost concealed the wariness of her soul. So there was a weakness, he thought with surprise. His heart softened and he adopted a gentler tone.

“It seems that whoever you are waiting for is late, so if you would care to follow me to-”

“He is not late. It simply appears that I am early.”

“An important meeting. You might say the most important meeting of my life and hopefully of his.” Her lips twitched in a humorous little grin before melting once more into her soft, vague smile.

“Alright…” the station master’s stomach rumbled again. “Well, if you wouldn’t mind moving indoors, I need to clear the platform…”

“You can go to lunch. I won’t do anything dreadful and I am quite safe here under this light.”

It was as if she had read his mind. Or perhaps she had just heard the continued gurgling of his stomach. Was she hungry too? He wondered, but the lure of food pushed the thought from his mind.

“Alright, well…I’ll be back soon.” He left with reluctance, hoping his manager would not realize his absence and her presence. He glanced back at her, but she was sitting facing forward as usual, focused on watching for whomever it was she was meeting.

An hour later, the station master returned, but he had not been able to eat as much as he had expected. An inexplicable concern for the woman on the platform had dulled his appetite. He clutched a doggy bag in one hand.

She turned to him once more, the soft smile seemed a little slow in coming to her mouth. Her eyes looked tired. Were those tears? Surely not. Just a trick of the light. “Yes?” There was a waver to her voice. Perhaps they were tears.

“I thought perhaps you were hungry,” he said, offering the bag. He was baffled at himself for saying that. He had not intended to bring her food and it was only his leftovers that he held out to her.

“Thank you,” she said. He thought he saw her eyes brighten a bit. “I was actually rather hungry.” She opened the bag and took a few dainty bites of the fish and chips, thanking him again.

“No trouble at all,” he muttered, scooching back toward his post.

“Would you like to sit?” she offered before he had made it far. She gestured to the empty space beside her, as hospitable as a queen in her palace though just a young woman at a train station.

“Oh, sure,” he said with a shrug. He was not sure why he felt compelled to join her, just as he had not understood why he had given her the food, but he sat down as if automatically and mirrored her perfect posture.

“Jake,” he said, taking it carefully. Her grip was unexpectedly firm as they shook hands and she looked him in the eye as she spoke. So there was a confidence beneath her soft appearance, he thought. Interesting.

“So, Leah,” he said. He liked the way her name felt as he said it. It was like a breath of ocean air, fresh. As much at odds with their grimy and common surroundings as she was. “Who are you waiting for?”

“Oh,” he said, caught off guard. “What does he look like? I can at least keep an eye out for him.”

“I don’t know that either, but I would like to think that he has kind eyes.” She glanced into his eyes and her cheeks blushed pastel as she returned to scanning the platform as another train zoomed to a halt and passengers gushed from its doors.

“Kind eyes…that helps,” he said, thinking perhaps the woman did not have her wits completely about her.

“You know nothing of this man?”

“I didn’t say that,” she said, starting and turning to face him once more. “I said I did not know his name or what he looked like, but I know about him. I know that he is strong and caring and smart and hard-working and hopefully has something of a sense of humor. And I know that eventually I will meet him. I just thought perhaps it would be here and perhaps it would be today. Maybe I was wrong about the time but I was not wrong about him. Wherever he is, he is all of those things and our journeys will reach their common end.”

“Where did you come from?” the station master asked, ignoring the woman’s talk. He was not sure he understood it anyway. “You’re sitting at a train station, but-”

“My shoes?” she finished. “Yes, they’re filthy and worn, but I had not the heart to change them. I felt I should be presentable with the rest of my appearance, but these shoes have been with me since the beginning of my journey here and I did not have the courage to change them and continue this path in different shoes since I did not know for certain if today would really be the end.”

“Interesting,” he said. His mind was working to make sense of her statements, but while he did not grasp the full significance of her situation, he understood the sentiment behind it. After all, he’d been wearing the same shoes for years and they’d been second hand to begin with, but they had become part of his life of walking up and down the platform day after day. To change them would be to change that.

Jake sat with Leah a few moments more as the crowd from the newly-arrived train thinned out. Then, saying he’d better get back to work, he returned to his post and pretended to look over some train schedules and ticket sales reports. But he could not stop himself from glancing up once in a while to check on that unusual woman who continued to sit and wait and wait and sit.

The sun sank behind the buildings and then behind the horizon. Jake shivered, donning his coat and pulling it tight about him. Even in the summer, London nights were chilly and it had been a drizzling, gray kind of day to begin with. Across the platform, the small shoulders of Leah moved slightly. Was that a shudder? Did she have a coat? A few feet from his post, the coffee vendor began to pack up his cart. Jake set his papers aside and rushed over.

Leah shivered again. She must have been wrong. What was she thinking? She mentally berated herself for being so silly. She had been waiting so long; what made her think today would be the day? And why here of all places? Stupid girl, she thought. She gathered her bag and stood to leave, sighing aloud in resignation. Trains to a new place had brought her no more luck than walking throughout the old. Besides, she thought with a glimmer of hope, she would be easier to find if she stayed put rather than speeding across the country.  But would she be found? Probably not, she realized with a sorrow beyond even a sigh. She was being absolutely ridiculous. Back to her house, back to her job, back to waiting in the old place. That was the sensible thing to do, after all.

Her straight shoulders slumped for the first time. A curl fell free of its pins, limp in the drizzle that mirrored her mood. Sensible had grown so dull, so “stale and unprofitable” as she had heard said once in a play, but what else was there to do? She turned to go inside where it was warmer and where she could buy a ticket to return to her sensible life of waiting.

“Miss?” It was Jake, that nice young stationmaster with the hair that needed a trim, the shirt that could use a running over with an iron, and the…kind eyes. She blinked.  He held out a steaming coffee cup and smiled gently. She shyly accepted the cup and murmured her thanks, looking down at the ground and their shoes. She noticed then that his were even muddier and more worn than hers and felt a strange urge to laugh, but instead she shivered.

“Oh, here!” Jake spilled some of his cappuccino as he wiggled free of his jacket and clumsily tried to wrap it around her shoulders. He laughed, embarrassed and shrugged helplessly.

“Thank you,” she said, laughing as the coat and heat of the coffee cup took away the sting of the cold.

“Would you like to go inside? To the waiting room? I can take you there,” Jake said. He looked at her with concern in his eyes.

“I would like to go inside, thank you,” replied Leah. “But I do not need the waiting room anymore.”