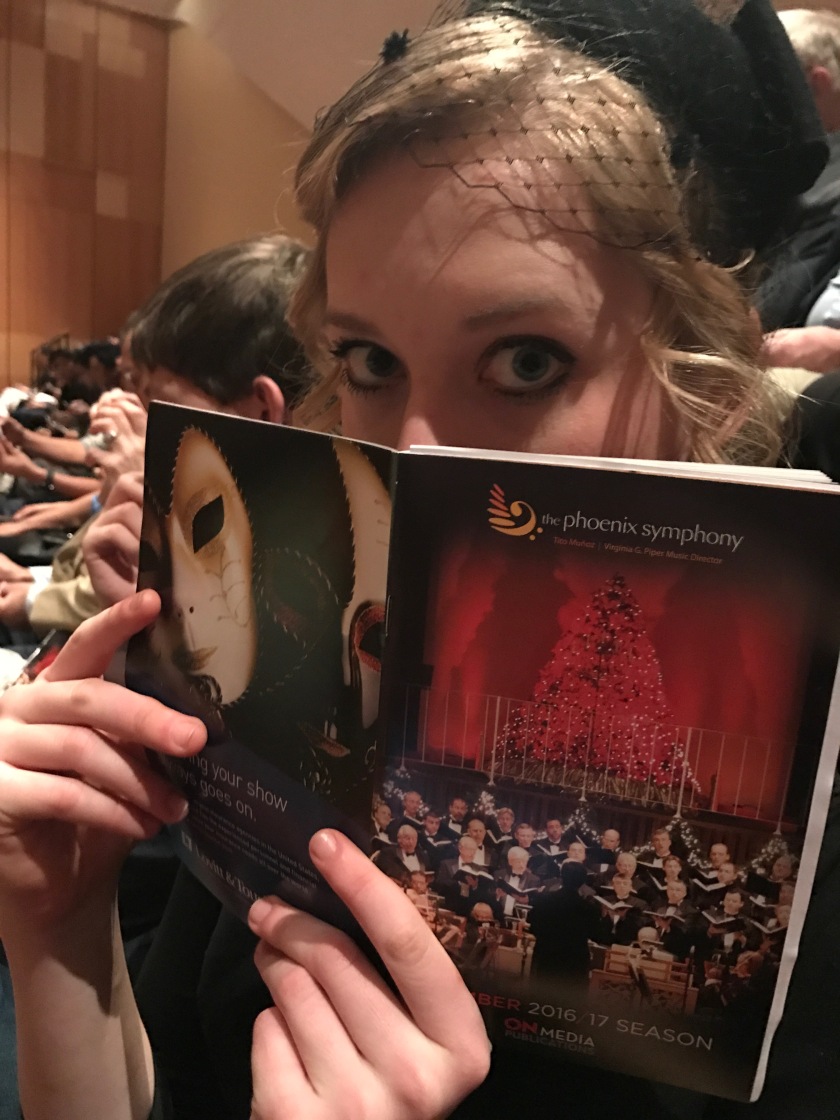 I remember Meg Ryan’s character in one of my all time favorite movies, You’ve Got Mail, saying of a wayward butterfly, “I believe he was going to Bloomingdale’s to buy a hat, which will turn out to be a mistake, as nearly all hats are.”

I recently learned from a particularly unique hat that this is not necessarily true. On New Years Eve, as a joke, I dressed up as Janet Snakehole, a character within a character from Parks and Recreation. Described as a “wealthy widow with a nasty secret,” Janet wears a vintage black netted hat, which I was able to purchase for $5 on Amazon. I was dared to wear it all day, including to a pottery place, Starbucks, the Phoenix Symphony, and the grocery store.

“I am going to look ridiculous,” I said, grimacing into the mirror.

My mom, in response, simply said, “Own it.” (Imagine her snapping sassily if that helps the image.)

“Own it” turned out to be the lesson of the day and one of my resolutions for the new year.

This hat was a joke and I felt like a major dork (“Major dork!” *salute*). But I stood up straight, added a fancy black dress and fake pearls to the ensemble, and faced the world. I tried to pretend I did not notice heads turn and people point it out. I felt my cheeks burning, feeling as ridiculous as I had expected to. Until….

An elderly woman and her friend stopped me. “You sweet young thing, wherever did you get that hat? You look right out of the 40s! I wish more young people dressed so elegantly.”

Not two minutes later, a young couple stopped me and asked where they could purchase such a hat.

Then more women stopped me to ask about it.

Best yet, as I walked through the grocery store, a butcher came running out from behind the counter to shout at me, “You look like you’re from Paris!” 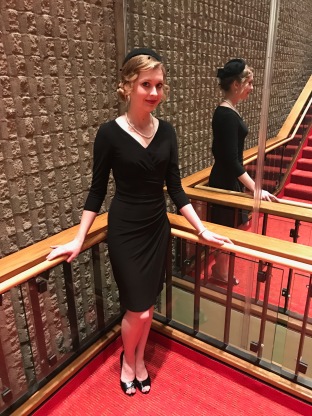 I wore this hat as an inside joke! And yet, somehow, it seemed to have started a small fashion riot.

I figured, in accordance with the You’ve Got Mail philosophy on hats that this little number would be a mistake, but I had not factored in feigned confidence. Act like it is intentional and people cannot help but believe you! Standing up straight makes any outfit work and owning it turns into true confidence.

This philosophy, realized through a ridiculous hat, extends to so many other areas of life. All of them, really. For instance…

In high school, my friends and I were music nerds and I remember being pressured by a couple “cool” friends to ditch them because the “popular” girls would think I was weird. But you know what? I’d rather spend my lunch hours playing improv games and singing along to musicals than gossiping. To all you teenage music nerds, OWN IT.

In elementary school, I hated sleepovers and always left them early. I know the other little girls thought it was strange, but guess what? I got more sleep! To you introverted little girls, OWN IT.

In junior high, I spent more time practicing piano than hanging out at the mall. And when I was at the mall, spent most of my time in the bookstore. To you bookworms of all ages, OWN IT.

All through my life, my mom has emphasized the “Own it” mentality, saying things like, “You’re taller than most people. Who cares? Own it. Stand up straight and be the tall girl.”

However, in college, I lost a bit of the “Own it” philosophy during my first year. Bless this bizarre hat for helping restore it.

I mean, I play the pipe organ. That might be the nerdiest thing ever.

SO OWN IT and play Phantom of the Opera at midnight!

Rather discuss books than go out?

OWN IT and work that copy of Plato like it’s a Kate Spade purse!

OWN IT and blast that KJazz!

Want to wear a modest dress to prom?

OWN IT and work that dance floor! (Or, in my case, ditch the dance floor and go play boardgames.)

DO NOT own hindrances:

Don’t own your mistakes; own up to them and move on.

Don’t own your anxieties; face them and own your victory over them.

Don’t own your temptations; own your strengths.

But overall, learn from the hat and own what makes you you! My favorite things about the people I love are the things that are most unique and “weird” about them and, once they themselves own these things with confidence, everyone else comes to admire them too!