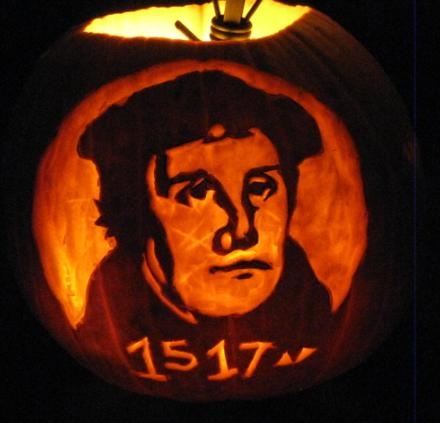 As families of children and teens work together to plan their annual Halloween festivities, one family is changing up their traditions, or, rather, continuing those began 500 years ago.

“We don’t celebrate Halloween,” said Mrs. Geneva Knox, mother of four, as she welcomed reporters into her home, sharing both insights and all natural, gluten and taste free porridge snacks.

“No,” added her husband, local pastor Mr. William Knox, as he coughed his way through the snacks. “That’s just a terrible day… all about devils and sugar…not healthy spiritually or physically!”

Mrs. Knox nodded in agreement and explained that instead of succumbing to the lure of free candy and unholy costumes, she and Mr. Knox would be starting a new door-to-door tradition with their children. Rather than miss out on the fun of trick-or-treating, the Knox family is reforming the pagan romp according to their faith.

“It’s really perfect,” said Mr. Knox. “Everyone is so excited for Halloween, but what they should be excited for is the 500th anniversary of the Protestant Reformation! I mean, why knock on doors asking for candy when you could follow the spirit of Martin Luther and nail Theses to doors instead?”

Instead of dressing in this years’ popular Wonder Woman and Stranger Things costumes, the four Knox children will be donning authentic Augustinian friar habits, which they learned to sew themselves during their homeschool history lessons. Properly attired, they will go door-to-door passing out copies of Luther’s 95 Theses, which they translated and hand-wrote during their penmanship lessons. Should homeowners not answer the door, Mr. and Mrs. Knox are planning to supply their children with a thumb tacks and toy hammers so that they can continue in the spirit of Luther by attaching their Theses to doors regardless.

“We wouldn’t want to leave anyone out just because they don’t answer!” explained Mrs. Knox.

However, those who do answer are in for a special surprise. Not only will they receive their own copy of Luther’s 95 Theses, they will also be treated to a rousing a cappella rendition of “A Mighty Fortress is Our God” sung by the four children.

“I’m excited to sing,” said Grace-Alone, the youngest Knox daughter, “but I confess I miss getting candy…”

Grace was quickly nudged into silence by her twin sister, Faith, and handed a consolatory cheese curd by her brother Zwingli.

“Yes, I know it is hard for the children to pass up on candy,” acknowledged Mr. Knox, “but we, like Luther, do not believe in indulgences.”

When asked whether they were excited to go door-to-door on Reformation Day, the Knox children had mixed responses. Grace still mourned her forgone candy, but brothers Zwingli, age 12, and Calvin, age 15, were more enthusiastic about their plans.

“I’m willing to give it a try,” said Zwingli with a shrug.

“Yeah,” agreed Calvin, “With our costumes and everything, we will be irresistible!”

The Knox family is hoping to promote their idea as an educational alternative for Protestant fun this Halloween. Perhaps they will start a trend amongst likeminded families, becoming reformers themselves.

“Whether it works or not isn’t the focus,” concluded Mr. Knox, “as we have faith that we are fully justified in this endeavour.”