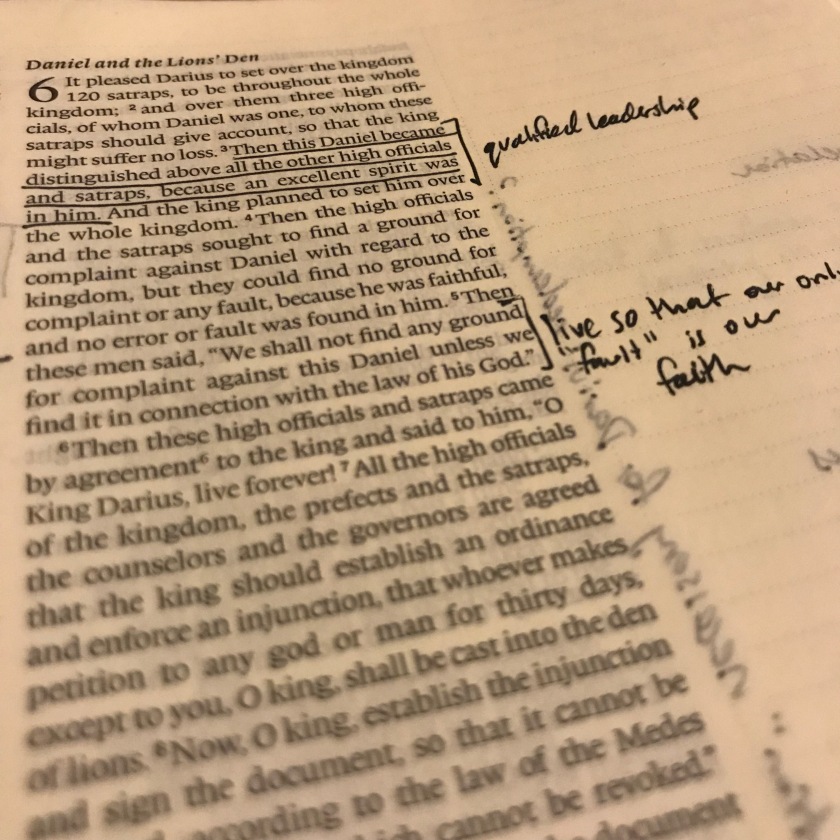 Throughout the book of Daniel, we see the interactions of men of faith with an ungodly empire. Not only does this biblical account document their faithful lives and the sustenance of an even more faithful God, but it provides a practical example for how we as believers are to live in society under a human government. In short, the book of Daniel teaches us how we are practically to interact with the empire of America as people of faith.

The empire (culture, political climate, etc.) of America is no better than that of Babylon, except perhaps in our ability to disguise the reality of our degeneracy in more persuasive rhetoric:

We do not have human sacrifice, yet in defending the extermination of the most vulnerable as a right, are we not sacrificing human lives to ourselves? We do not have sacred prostitution, but we promote a culture of such complete sexual freedom that do we not we end up worshiping sex itself? We do not have a confusing pantheon of idols, but do we not find ourselves pulled constantly between the exaltation of wealth, reputation, health, and ambition?

Honestly, though, America alone is not Babylon; all human societies without the mercy of God are Babylon. Still, how are we, as Christians and citizens of the Kingdom of Heaven, to live in and interact with our current earthly nation and, more particularly, our government? The book of Daniel presents clear argument for involvement yet consecration; we are to influence while remaining set apart, living as dutiful citizens here because of our true citizenship beyond.

“The king assigned them a daily portion of the food that the king ate, and of the wine that he drank. They were to be educated for three years, and at the end of that time they were to stand before the king…But Daniel resolved that he would not defile himself with the king’s food, or with the wine that he drank. Therefore he asked the chief of the eunuchs to allow him not to defile himself.” (1:5-8, ESV)

When he is taken into captivity, Daniel rejects the food provided by the Babylonian king. This is likely to avoid eating food that is not acceptable by the Old Testament law. However, this also is a nonverbal declaration that Daniel and his companions are subject to God alone and, thus, look Him for sustenance. Similarly, we cannot expect provision from the government, but must look to God to provide. Also, we are not to become indebted to a human authority, especially at the risk of violating God’s commands.

We can be comforted to see in Daniel that God is faithful to provide beyond what we would expect; although Daniel and his friends did not eat of the king’s portion, they grew in strength and wisdom beyond all those who did.

“God gave them learning and skill in all…and the king spoke with them, and among all of them none was found like Daniel, Hananiah, Mishael, and Azariah…in every matter of wisdom and understanding…he found them ten times better than all the magicians and enchanters that were in his kingdom.” (1:17-21)

Continuing on, although he refused to violate the law of God in obedience to the offers of men, Daniel did not abandon a remarkable respect for these human authorities. Part of recognizing God’s supreme authority is to also recognize that leaders, even wicked or poor ones, have their power only by God’s permission. In light of this, even the seemingly worst rulers must be treated with respect, though not necessarily with agreement or endorsement.

“You, O king…to whom the God of heaven has given the kingdom, the power, and the might, and the glory, and into whose hand he has given wherever they dwell, the children of man…” (2:37)

Daniel here addresses the king with the utmost ceremony,  but without abandoning clear adherence to his faith. Indeed, his faith and virtue shine even brighter in his dignified address of the king, for it reveals that he respects this king because he knows his power is granted by the King of Kings. If we are to honor our God who gives and takes away all authority, we must show respect to earthly leaders regardless of their personal merit. In acting with such graciousness, we might even direct the hearts of leaders to see who is the true Ruler:

“Then King Nebuchadnezzar fell upon his ace and paid homage to Daniel, and commanded that an offering and incense be offered up to him. The king answered and said to Daniel, ‘Truly, your God is God of gods and Lord of kings, and a revealer of mysteries…’ Then the king gave Daniel high honors and many great gifts” (2:46-48)

We are called to respect our authorities, even those we did not want. We cannot simply ignore them and mock them because they are “not our president,” but rather we ought to offer respect, even if it is respect in disagreement. The book of Daniel continues to show how just such disagreement can be used to change the government. When Daniel refuses to abandon his faith, despite the threat of the lions’ den, not only is he rescued, but the king’s heart is lifted toward the Lord.

“Then King Darius wrote to all the peoples, nations, and languages that dwell in all the earth: ‘Peace be multiplied to you. I make a decree, that in all my royal dominion people are to tremble and fear before the God of Daniel” (6:25)

Throughout the account, we see Daniel granted positions of great influence due to not only his respectful demeanor, but his ability to offer godly insight. In this, it is clear that we can have a massive impact on our government for not only our earthly nation, but the Kingdom of God. However, to do so, we must be involved. Daniel did not seek a personal policy of noninvolvement. Rather, he confronted and entered into the government which posed a threat to him and his people, speaking truth where deception once reigned.

“Daniel became distinguished above all the other high officials and satraps because an excellent spirit was in him. And the king planned to set him over the whole kingdom” (6:3)

“The king…said to Daniel, ‘You are that Daniel, one of the exiles of Judah… I have heard of you that the spirit of God is in you, and that light and understanding and excellent wisdom are found in you.” (5:13-14)

The manner in which he influenced the government is remarkable. Daniel did not demand to be heard, nor did he adapt himself to be more palatable. Rather, he simply lived in excellence, striving to be the most faithful and diligent man of God that he could be, leaving the promotions in God’s hands. Today, we can apply the same approach; if we genuinely are seeking to make a difference in our nation, we cannot do so by anger or avoidance, but through excellence and honesty.

“Then I turned my face to the Lord God, seeking him by prayer and please for mercy with fasting and sackcloth and ashes. I prayed to the Lord my God and made confession, saying, ‘O Lord, the great and awesome God, who keeps covenant and steadfast love with those who love him and keep his commandments, we have sinned and done  wrong and acted wickedly and rebelled, turning aside from your commandments and rules.'” (9:3-5)

Although wicked governments can be changed by excellent people of God, we must leave the ultimate judgement to Him. In the meantime, we must work hard and pray harder. We are not only called to be influencers, but intercessors, calling upon the Lord when our leaders do not. We, like Daniel, cannot forget the power of prayer and that we have constant court before the King of Kings. We are quick to protest, but slow to pray, and should learn from Daniel that our prayers are heard by the God who works in the hearts of men.

“Then these men said, ‘We shall not find any ground for complaint against this Daniel unless we find it in connection with the law of his God.'” (6:5)

However, personal excellence and service to God do not guarantee that our governments will change to favor our faith. We have to remember that to be chosen for life in heaven is to be chosen for trials on earth. It cannot be surprising when human governments fail in their first purpose: protecting their citizens. In fact, we should not be surprised when we are persecuted. Daniel lived in a manner so that his only fault was his faith and yet he was punished for it. He obeyed the laws of the land until they conflicted with the law of God and there he took his stand. Today, we must defer to the government, but know where the line is and hold fast to truth.

“O Lord, hear; O Lord, forgive. O Lord, pay attention and act. Delay not, for your own sake, O my God, because your city and your people are called by your name.” (9:19).

In these times of discontent with government and culture, we must ultimately recall this final lesson: even amidst persecution, the righteous will outlast many generations of wicked rulers. Unlike God’s reign, the tribulation of wicked governments will not endure. With this hope eternal, we can withstand the momentary affliction of imperfect kingdoms while we yet strive to improve them for the eternal kingdom which is and is yet to come. Following the example of Daniel, we are to be respectful and responsible citizens on earth because we are ambassadors of heaven.

Daniel was a captive of Babylon and yet he lived with dignity, diligence, and dedication; how much more so should we do the same as free citizens of America? We are to be servant-leaders of our earthly nations, at once dignified and humble as we remember that we are both servants and heirs of the King of Kings.