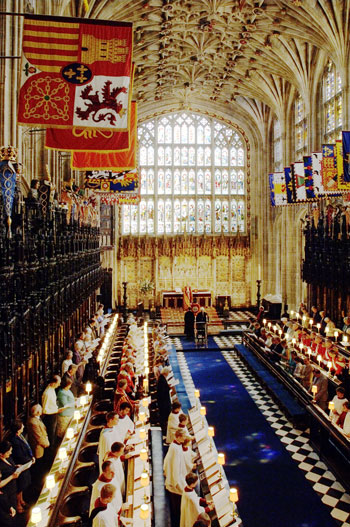 The Royal Wedding was beautiful: the flowers, the music, the gown, and- of course- the fabulous array of hats. But this event was not just a stunning example of a wedding ceremony, but of a liturgy. It was set in a gorgeous chapel, featured traditional English hymns, and presented a rich theology in both the message and the order of service.

The dean of Windsor opened by invoking the Father, Son, and Spirit and then introducing the responsibility of the congregation (Note: not merely guests, but a congregation) to witness the marriage now and to support it in the future. In the brief discourse that followed, he made no effort to soften the truth of marriage as an image of a holy reality:

“Marriage is a gift of God in creation through which husband and wife may know the grace of God. It is given that as man and woman grow together in love and trust, they shall be united with one another in heart, body, and mind, as Christ is united with his bride, the Church.”

From this opening statement, all gathered (and the many millions watching worldwide) were confronted with the truth that marriage is at once something greater than we could ever imagine, but also something far less. In recognizing marriage as an image of the divine union, faithful husbands and wives will find their marriages elevated and edified. However, they also will find that there is something far greater which they must strive toward together: the ultimate marriage of the Church to Christ.

That the Royal Wedding followed a liturgical structure made this explicit. Why should a wedding parallel the order of an ordinary (though grandiose) church service? Because the marriage of a human man and woman is not the primary focus, despite the media thrill. A liturgical wedding reminds guests that they are in fact called to be the congregation and believers that they are to be the Bride.

In the same way that we might consider a wedding liturgical, we must not forget that every gathering of the faithful in worship- that is to say, every Church service- is also to be a wedding. As the Dean of Windsor proclaimed, human couples are but imaging the divine mystery of Christ and His redeemed Bride. This marriage of the heavenly and earthly ought to be celebrated both in liturgies and weddings.

I am thankful for my nondenominational upbringing, but I do feel that something beautiful and significant is lost when traditional liturgy is abandoned completely. I recognize the dangers of becoming focused on ceremony instead of faith alone, but having never experienced the dignity of such a service, I had never considered what it meant to be the Bride of Christ until I began working as an organist for an Anglican church and then attended a mass in Assissi, Italy.

At first, I was inclined to view it all as spectacle; it felt posed and practiced, so unlike the “authentic” and casual services I had experienced. However, as we stood to the strains of a familiar hymn and the priests processed down the aisle with incense and sacraments, I realized that I was not at church as I knew it, but at a wedding.

The white robes, the organ processional, the congregational responses affirming the creeds… These were all things I had associated with weddings, not necessarily with church. However, the two quickly reconciled as I recalled that the Church is a Bride, indeed, the Bride.

I knew then that, should I marry, my wedding would have to be more liturgical, not just because I am a traditional soul with a soft spot for stained glass and organ music, but because I want my wedding and the marriage that follows to be an overt visible image of the union of Christ and the Church. To have a wedding that is conducted like a church service is to image the divine mystery and to remind those of the Church that it is they who are the Bride even if they are not yet gowned in white.

It is for this reason that I now yearn for liturgy and ceremony. I fear that many contemporary believers, like myself, have forgotten (or perhaps never considered) what it means to be the Bride of Christ. To participate weekly in the procession, recital of creeds, and celebratory singing is more than just a rote liturgy; it is a rehearsal for the realization of the true Marriage.

To rehearse is, simply, to remind and to prepare. The idea of rehearsing for the marriage of the Lamb is beautiful in itself, but also practical. Beyond the joy of realizing ourselves to be a Bride with hope in our future union, to know ourselves as the Bride of our Savior is to change our entire outlook- the entirety of our conduct, relationships, and lives.

And men, called to image Christ in their marriages, are yet members of the Bride of Christ. They are called to the same fidelity, focus, and fervor, loving their earthly spouses because they also are to live after the example of Christ and are themselves waiting upon him as the true Bridegroom. A godly husband on earth is yet a Bride of Christ in heaven.

“This is a profound mystery—but I am talking about Christ and the church. However, each one of you also must love his wife as he loves himself, and the wife must respect her husband.”

Beyond conviction and correction, though, to be the Bride of Christ has been a source of immense encouragement. In recent years, I have watched friends and peers I’ve known since childhood fall in love and marry. While I recognize that marriage is a blessed relationship, I know that it is intended as an image of a greater reality. While this truth gives greater significance to a godly marriage, it also brings hope to those who have not found or cannot have this type of relationship; to be a single believer is not to be excluded from marriage, but to be able to live fully into the most blessed Betrothal.

Indeed, upon the consummation of this most holy and redemptive union, there will be no other marriage. This is not because marriage is not a good thing, but because it is an image; once the divine reality is realized, what need is there for a reflection?

“For in the resurrection they neither marry nor are given in marriage, but are like angels in heaven.”

Husbands and wives are called and enabled to love each other by realizing their identity as the Bride of Christ and their role as image bearers of this relationship. In the same way, single Christians are also to show the redeeming love of Christ and live in the faithfulness of His Bride. How comforting to know that earthly marriage is not a prerequisite to the heavenly union! And how edifying to find that an earthly marriage might sanctify toward this union!

If I never marry, I will yet be a Bride. By the blood of Christ, I have been redeemed to a union that has fully saved and will fully sanctify and fully satisfy forever. As one of my favorite hymns sings, what wondrous love is this?

In realizing this, we find a richer joy in weddings, for we look toward the reality that is promised us. We are also revived in our hope and love as we weekly participate in the various liturgies that represent more than a rote pattern of worship, but the Holiest Matrimony. Married or single, all members of the Church are exhorted to look to Christ with the joyful anticipation and diligent preparation of a Bride awaiting her Beloved.

“Let us rejoice and be glad
and give him glory!
For the wedding of the Lamb has come,
and his bride has made herself ready.
Fine linen, bright and clean,
was given her to wear.”

Let us as Christians be reminded each week in our worship that we are the Bride and let us rejoice in marriages as they image the mystery of the divine union.

The most Royal Wedding is yet to come.