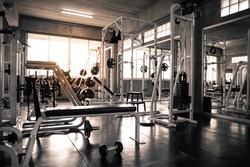 Today, I chose the treadmill most people at the gym avoid. Situated right behind a load-bearing column, it’s the one treadmill that doesn’t afford a view of either the TVs, the mirrors, or other people. I anticipated insufferable boredom and resolved to run as quickly as possible so I could be done as quickly as possible. After a mile, though, I began to suspect I may have chosen the best treadmill for the very reasons I initially considered it the worst.

As I ran, I stared at the column and pondered the seven TVs. Every time I am here, they become more off-putting to me. Today, I realized why…

The first TV always plays music videos. I’m a musician, but I look at this TV as little as possible. It seems to represent lust, using this deadly sin as an incentive for people to get in shape or workout with extra passion.

The second TV is currently playing Jeopardy. I’m oddly good at Jeopardy and, in general, find it harmless. And yet, controversies surrounding a recent champion remind me of the verse, “[they] are always learning and never able to arrive at a knowledge of the truth” (2 Timothy 3:7, ESV). This show celebrates greediness for knowledge but has little to do with true wisdom.

I enjoyed Jeopardy (my best option) for a while as I used the exercise bike. But then, I moved on to the third TV and was confronted with accusers arguing their cases before Judge Judy. Wrath fought for compensation…and my attention.

The fourth TV boldly promoted unhealthy lifestyles in the name of body positivity. Certainly, our bodies do not define our worth, but this should liberate us to care for them as best we can instead of to deny the reality of disorder and gluttony in the name of self-love.

The fifth TV seemed to include every deadly sin as it’s reality stars enjoyed “shots on yachts.” Marketed as entertainment, there is no way this show is meant to evoke anything other than envy in its viewers—of its attractive stars, their extravagant lifestyle, and their total lack of normal inhibitions.

The sixth TV is always ESPN, which is not innately wrong. But it would be delusional to pretend pro-sports aren’t deeply influenced by pride and ambition. Those might even be the pillars of the industry.

The seventh (and final) TV is a half-hearted one. It glows a dim purple and is always fuzzy. I honestly can’t tell what it’s trying to portray, so it takes little imagination to dub it the “sloth” TV…too weak-willed to even portray evil.

So, there you have it: my slightly-fanatical workout reflections. Drafting this post managed to distract me through an otherwise dull workout, so I hope you find it somewhat interesting and, maybe, convicting.