I promise I’ll explain the cat sandwich in space picture in the end, so just bear with me for a few paragraphs, okay? Thanks.

I am what most would consider a perfectionist, which is in itself both a blessing and a curse. On the positive side, it leads me to, more often than not, accomplish my goals with a high degree of excellence. However, it also leads to misery when I meet with any outcome that I see as failure, which happens far too frequently because perfectionism’s continual lie is that if the outcome is in any way short of flawless, it might as well be a failure worth mourning.

As rough as perfectionism makes life, I am learning to move past it. I have had to logically tell myself that I probably will not earn 100% in every class (I might have to be happy with- dare I say it?- a regular A), I won’t win every music competition despite hours and hours of practice, and- silly as it sounds- I need to give up trying to wrestle my hair into the ideal braid because, despite what Pinterest says, no formal hairstyle can really be done in five minutes. In these areas and more, I have learned and am continuing to learn to let the struggle for perfection go and instead find contentment in the pursuit of excellence.

Perfection cannot be achieved and I’m fine with that. (Well, I’m trying to be fine with it.) However, my contentment faces another enemy:

I know, that’s not a real word, but I don’t care. Dinglehopper. That’s not a word either. So there. Anyway, as I spend more and more time working on my college studies, I find myself fighting harder and harder with everythingism and I’m afraid it is a losing battle. 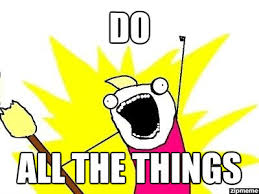 “Everythingism”is the only way I could think to describe my intrinsic compulsion to do everything. I am a piano performance major, but also am in the honors college, sing in the top choral ensemble, and have a job as an accompanist at a local church. On top of that, I try to post to this blog regularly and want to finish writing my novel. Oh, and I want to compose music. And resume taking organ lessons. And go running daily. And become a better dancer. And run a macaron bakery. And, and, and…the list goes on and on.

I cannot do everything and I especially cannot do everything perfectly. Combined, my everythingism and perfectionism are a recipe for exhaustion, frustration, and discontent. I admit that I like to be busy and can balance quite a few commitments at once, but not everything. That said, I just wanted to encourage my fellow perfectionists and everythingists to take a step back, evaluate what their priorities really are, and breathe. Just breathe for a second. Feels good, doesn’t it? 😉  Now keep reading:

The Everythingist’s Guide to Thriving:

So there you have it. I’m sure I’ll keep adding to this list of ways to cope with everythingism, but I’m still learning how to deal with it myself. Overall, I believe the best advice can be found in something my dad told me: “Be content, but not complacent.” Find a peace in knowing that you do not have to do it all perfectly or do it all now, but do not forget to strive for excellence in what you do choose to pursue.

Oh, and one more word of wisdom:

“Don’t be an everythingist or your life will turn into the human equivalent of a cat sandwich in space: too many things without any clear rhyme or reason.” -Yours Truly 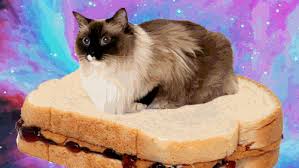 I am a busy person, not necessarily because I have committed to a lot or because my parents expect a lot from me, but because I make everything I am passionate about into a serious commitment and expect a lot of myself. (Started piano lessons? Practice to be accepted as a piano major at a conservatory. Enjoyed macarons on vacation in Paris? Start a macaronery from my kitchen. Did well on one AP exam? Sign up for five and study daily for each.)

I love music and baking and even studying, as well as many other things, but after weeks of straight practicing and studying without breaks, it becomes exhausting and (this has happened numerous times) I suffer the inevitable breakdown. Every time, I try to logic my way out of these slumps, telling myself that I should not be tired since I am getting a solid five and a half hours of sleep each night, that I should be a better performer because I’ve been practicing relentlessly, that I should be relaxed because studying is just reading and reading is fun. I think to myself, “Don’t sit still, Ryanne. Don’t watch another episode on Netflix or read another chapter in your novel. Don’t be lazy.”

That is the conclusion I have ultimately had to reach: N.O.P.E. Nope. No matter how hard I try, I cannot and never will be able to logic my way around the human need for rest. As much as I would like to imagine that I am a superhuman whose brainpower can overcome her body’s fatigue, I am not. Rest is vital and that is something that I wish I had come to terms with earlier. And, more importantly to a perfectionist such as myself, resting is NOT the same thing as being lazy.

“Laziness” is defined by the Oxford Dictionary as “the quality of being unwilling to work or use energy.” It is a choice and, unless found in one of the world’s most adorable animals (in my opinion), the sloth, it is not generally considered an admirable quality. In fact, (sorry, sloths), throughout literature, laziness is presented as among sins. Take the classic tale of “The Little Red Hen”, for example. The only antagonizing force in the story is the laziness of the animals who were unwilling to help. And, for a stronger example, the Bible goes so far as to declare in Proverbs 18:9 that “Whoever is slack in his work is a brother to him who destroys.” Based on this definition, I am justified in trying to avoid laziness.

In contrast, “rest” is defined as “a ceasing of work in order to relax, refresh oneself, and recover strength.” Wow. I never realized just how unrelated laziness and rest truly are. Rest is not the result of a lack of the will to work, but of having worked and needing to “recover strength.” Rest is always portrayed as deserved, peaceful, and necessary. To continue using the Bible for examples, the Sabbath was a day set aside specifically for rest (“six days you shall labor” -Exodus 20:9), Jesus promised rest to those who follow Him to the end (“Come to Me, all who are weary and burdened, and I will give you rest.” -Matthew 11:28), and, perhaps most significantly of all, God Himself is described as resting for a full day after the creation of the world (“God had finished the work…so on the seventh day He rested” -Genesis 2:2). Rest is garnered after hard work and it is necessary and, most of all, it is good.

Rest is good. I only wish that I had learned this sooner. In the constant race for accomplishing more and working harder, it is easy to scorn rest as laziness. However, it is vital that I and others like me who often forget the importance of rest, learn that it is alright, even good, to sometimes watch another episode on Netflix, read another chapter, eat another cookie, meet another friend, or hit the snooze one more time because without this rest, we will find ourselves unable to return full-strength to the work about which we are passionate.

Before I click “publish”, I would like to add something that a friend of my mother’s once said that really impacted me: “Life is like music; without rests, it would not be as musical or as meaningful.”